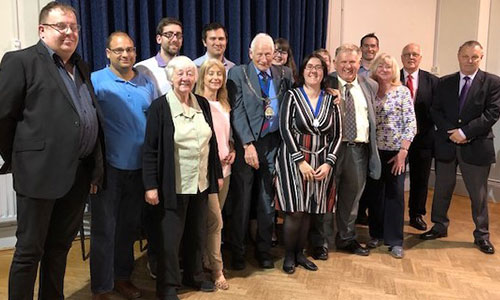 Cllr Powell said he was very honoured to accept the office of Chairman & Town Mayor for a second year and he would continue to strive to achieve as much as possible for Horley and its residents during this time. He added that he looked forward to working with the eight newly elected members and those re-elected and he also paid tribute to all former Members who had worked tirelessly during their term of office and had since stood down from the Town Council.

Cllr Samantha Marshall said that she looked forward to working with Cllr Powell in her capacity as Vice-Chairman for another year and supporting him throughout this time.

At the meeting, the first one of the new Municipal Year, all Members were elected onto the main committees. Committee Chairmen will be elected later at their respective committee meetings. The schedule of Council meetings is available on the Town Council’s website, as well as on the town centre notice boards.  Further information is available from the Town Clerk.

Join the Horley & District Chamber of Commerce and become part of a supportive local business community.
Become a member
© Horley & District Chamber of Commerce 2021
Back To Top
×
We use cookies to ensure that we give you the best experience on our website. If you continue to use this site we will assume that you are happy with it.AcceptPrivacy policy